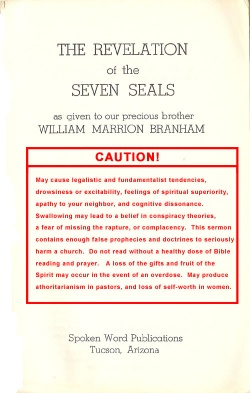 This article is one in a series on the Message of William Branham - you are currently in the article that is in bold:

What the message actually is

But......how do you know you the person you're chatting with is a message believer?

These are the visible hallmarks of a message believer:

Included in the set of doctrines that constitute the message are a large number of teachings that were plagiarized from Clarence Larkin. These plagiarized beliefs include William Branham's teachings on the seven church ages, the seven seals, the gates to the soul and the token. He also plagiarized from Billy Graham (thinking man's filter) and C.L Franklin (the eagle in the chicken coop).

Doctrines or interpretations based on William Branham pointing to himself

There are a group of other doctrines that are largely unscriptural which William Branham promoted as part of his "message":

What do followers of William Branham think that the message is?

Has anybody ever asked you what the Message is? I have had it asked me, "You call yourselves 'Message Believers' but what is the message?" I tried to explain it to the person, but they couldn't catch it.[1]

A message pastor expressed it this way:

When you point out to message ministers that William Branham actually didn't bring anything new but, in fact, plagiraized most of his teaching, they respond:

William Branham's ministry was designed to tie up all of the "loose ends" in the Bible.

In the end, the "message" is simply a collection of William Branham's sermons and therefore, his teachings. It is not Jesus Christ, it is not the Word of God. The message is William Branham's take on the Bible and it is filled with error.

What do message believers actually believe?

Is the "Bride" a special category of Christian?

William Branham was not the only one in our age to use the parables of Jesus to split the Church into various groups, such as the bride, the friends of the bridegroom, the virgins, the guests, and the servants. Many exclusive groups do this to make themselves feel special. But this is pressing the analogy too far. We must be careful that we do not become like Nicodemus when he pressed the analogy of birth too far by asking how we could go back into our mothers’ wombs and be born again (John 3:4).

Another common teaching, which was also espoused by William Branham, is that the Rapture will be limited to a special group of “overcomers” (the Bride), and that the main body of the Church will be left behind to go through the Tribulation or to go up in later raptures. If we examine what the Bible has to say about overcomers, however, we see that only those who overcome will eat from the tree of life, they will not be hurt by the second death or the lake of fire, and will not have their names blotted out of the Book of Life (Rev 2:7, 11; 3:5).

To overcome means to conquer, to win. If we do not win, we lose. These verses in the Book of Revelation indicate that those who do not overcome lose out forever.

Who then are the overcomers? I John 5:4 tells us, “This is the victory that has overcome the world, even our faith.” All the born-again believer has to do to overcome is to believe (be an obedient believer and keep on believing) that Jesus is the Son of God. Then God gives us the victory through our Lord Jesus Christ (1 Cor 15:57). He makes us winners.[3]

Some have suggested that John refers to an elite group of Christians who have reached a special status in which they no longer sin. But the text does not restrict godly living to a special group of Christians but rather claims that all believers without exception — anyone born of God — do not sin. Hence, a spiritual elite cannot be in view here. [4]

The church natural, that's in Sodom. But remember, there was one church spiritual, that wasn't in that denominational outfit, either. Called-out group, and they received a message, also, and a messenger. And what was it? Discerning the thoughts that was in the heart. God always proves His Word.[5]

I want to ask you something. In all of the ages, since the church first began, they have never had a messenger to them that his name ended with h-a-m, till now, G-r-a-h-a-m. Right. Down there, calling them out, Oral Roberts, and a Billy Graham, see, h-a-m. There's been Moody, Sankey, Finney, Wesley, Billy Sunday, all them, see, international church like that, world church!...?... There's never been one ending to h-a-m till right now, and that's Billy Graham. See? And that's six letters, G-r-a-h-a-m, six, meaning... Man was born, created on the sixth day. Six is man's number. There he is, to the church natural.

Abraham was A-b-r-a-h-a-m, seven letters. See? Look at the setting of today, and look what's taking place. Abraham had seen many signs and wonders, and everything that God had done. So has the Church. You've received the Holy Ghost, spoke in tongues, done all these signs and wonders. But you're promised, "As it was then, so shall it be again." "It shall be Light in the evening time." Jesus Christ, the same; same Son will appear again on the scene, in His Church, and will do the same thing that He did then, showing that He is the Word made manifest. See? Knowing the secret that's in the heart, revealing and doing the things that He is supposed to do. That's exactly the Word of God.[6]

And then the church natural is just a bunch of people in denominations, that joined. It's no more... I don't even no more call it "church." I don't like to refer to it. I like to refer to it as a "lodge," Methodist lodge, Baptist lodge, Pentecostal lodge. But the Church is the borned-again that's in Christ Jesus, that's new creatures. And so we still see that, that God keeps His Word.[7]

Because, the pyramid's Writing on the outside, as the brother had the dream, I interpreted it to you. That's the entire interpretation. Now, all the mysteries of justification, sanctification, baptism the Holy Ghost, was done explained. Now picking up the loose ends of that, which was concealed in the Seven Seals, not the seven churches. The Seven Seals reveal the mysteries. And then He opened this thing up, at the top, and found a Rock in there, white, but had never been wrote on. It was a mystery.[8]

Just exactly like He showed us the Seven Church Ages, what would come. Just exactly what He showed us what would come when He set that Light up there, in revelation to it, to show the world. When He sent the seven Angels to reveal the seven messengers that had been down through there, and show the loose ends, each Angel coming each day and revealing the loose ends that Luther left, and Wesley left, and Pentecost left, is all represented in there. And in the very type and shadow of the great Shalom, Jehovah, Yahweh. See? Exactly. Throwed It in the skies, and there is the mechanical eye taking a picture of It. See? Thank the Lord![9]